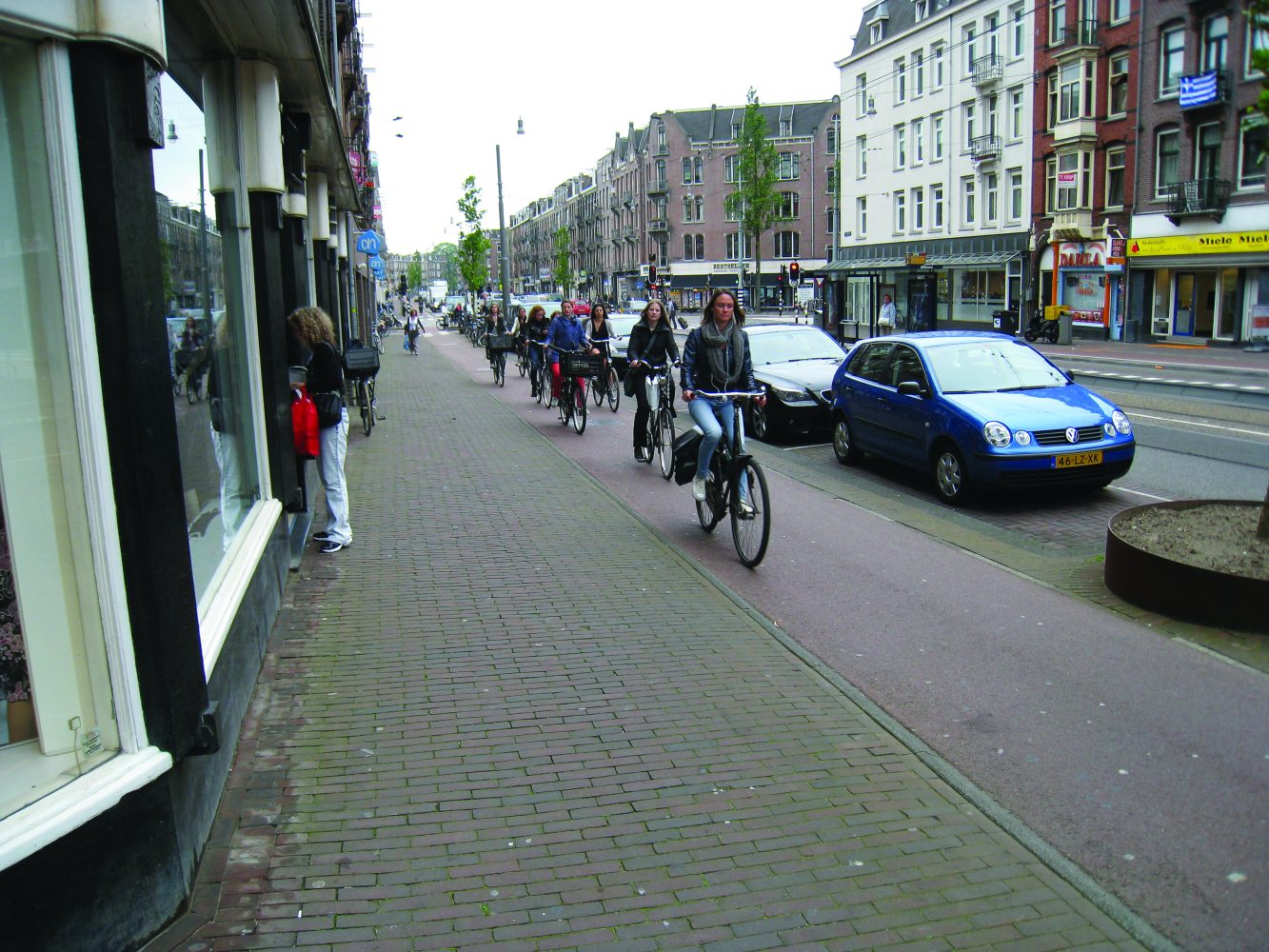 The city hopes to continue to increase bike lanes by an additional 17 miles each year until 2017. Photo by Lee Hardy

Grand Rapids has announced plans to add 26 miles of new bike lanes across the city over the next nine months because of rising citizen demand.

These bike lanes will be implemented in two phases. The first begins this week and will involve 16 miles of new bike lanes around the city and the last ten miles will be added in the spring.

This plan would be a significant increase on the seven miles of bike lanes in Grand Rapids currently, and the city hopes to continue to increase bike lanes by an additional 17 miles each year until 2017, City Manager Greg Sundstrom said to MLive.

MLive also stated that the 26 miles would cost $71,100 for this fiscal year and that Sundstrom is hoping to get $90,900 each year to build new lanes and maintain old ones. The city announced in a press release that “additional resources to expedite expansion of the network are currently being sought.”

The press release said that the plan is a response to a campaign by the non-profit advocacy group Greater Grand Rapids Bicycle Coalition to have 100 miles of bicycle facilities by 2014, and that Grand Rapids is working in conjunction with the group. Grand Rapids first started putting up signs and adding bike lanes in 2010, the same year they passed the Complete Streets Act, which commits the city to designing roads around pedestrians, cyclists and public transportation as well as cars, and bike use in the city has already started rising. The press release noted that “the city’s first bike lanes on Lake Drive saw a 36 percent in the number of bicycle riders,” for a total of almost 50 cyclists an hour.

Professor Lee Hardy, who did research on urban cycling in Copenhagen and Amsterdam on a grant from the Calvin College Alumni Association, applauded the new plans as “a great step in the right direction.” He said that bike lanes “give official notice of bikers” and helps build awareness of bikers on the road as well as giving a sense of security to bikers, but “bike lanes are not as good at increasing actual safety.”

Hardy emphasized the importance of bike lanes as a start, since they’re “relatively inexpensive and can be added when roads are renovated,” and lead to people being comfortable beginning to ride bikes. Once enough people begin riding, Hardy argued that “when you reach ‘critical mass,’ biking becomes a lot safer.”

Hardy agreed with Mayor George Heartwell about the benefits of cycling use. In a press release, Mayor Heartwell referenced economic, environmental and health reasons for promoting bicycle usage, the same reasons cited by Professor Hardy.

The Grand Rapids press release focused more on health reasons, noting that “the state of Michigan recently ranked fifth as the most obese state in the country, with 31.3 percent of the population considered obese.” The release went on to say that “quality public infrastructure, such as bike lanes and sidewalks, can make a substantial difference to promote active living.”

Hardy suggested that health benefits and environmental friendliness weren’t the only reasons for promoting bicycle use.

“You don’t have to be an idealist to bike,” Hardy said. “It saves money for the city for each kilometer traveled by a cyclist instead of a car,” he said, pointing to less wear and tear on roads and better public health, something Mayor Heartwell also specifically mentioned.

“It makes perfect sense for the city even if they didn’t care about anything else [besides finances], just as a business decision, to promote bike use,” said Hardy.

From his experience in Amsterdam and Copenhagen, Hardy had several ideas for where to go after bike lanes, which are just strips of paint on a road designating an area to be shared with cyclists. He suggested the use of bike paths, which are entirely new parts of a street separate from the sidewalk and car lanes, over bike lanes, although he admitted that “bike paths are more ambitious, because they involve redesigning the street somewhat.” However, he pointed out that “in Copenhagen, they found that when bike lanes were replaced with bike paths, ridership increased 20 to 30 percent.”

Hardy is going to present some of his ideas to a city design committee sometime in mid-September, according to a Calvin news article. He suggests that the city focuses on areas especially conducive to bike use, typically flat areas with high population density, and also suggests that the city try and plan safe routes to and from schools.
Hardy specifically mentioned certain areas that could be improved, such as 28th Street. “28th Street has a huge right-of-way, there’s lots of space there. We could have a great cross-town bike path.”

He also points to Burton Street as a street that could be improved and possibly provide a safe and easy transportation route for Calvin students that live in the area. He suggests that Burton could be changed from a four-lane to a three-lane road fairly easy, which could also serve to slow traffic on the road somewhat. “I don’t know why we feel an obligation for cars to travel 45 miles per hour,” Hardy said of the street, whose posted speed limit is 35 miles per hour.